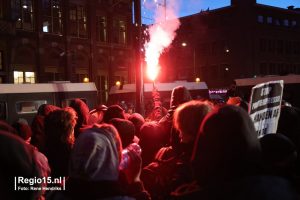 Yesterday at 16:00, 250 people gathered at the Kerkplein to march in a demonstration against the repression that anarchists and antifascists in The Hague and elsewhere have been facing during the last few years. Repression such as constantly prohibiting demonstrations, and mapping the activities of anarchists and antifascists in order to implement repressive measures. This demonstration was also crushed with repression and violence from the police, per order of Hague mayor van Aartsen.

The demonstration was surrounded from the outset by the Riot Cops and was filmed by the police on all sides. Afterwards, the police ordered that everyone remove their face coverings because, “that was the agreement”. One thing is certain, there was no agreement made about this and this was also not in the notice that the police drafted listing the conditions.

It was immediately clear that the riot cops were just looking for an excuse to engage in a mass arrest, which also happened. The police kettled the demonstration and attacked the group. While the police were attacking the demonstration, they called on people to be calm; a prime example of the way The Hague police try to deescalate. During this mass-arrest, people were hit in their faces, an arm was dislocated, and several people had leg injuries. The police used chokeholds several times and the few people who left the demonstration after being ordered to do so were subsequently beaten. Eventually between 166-184 people were arrested.

The demonstration experienced exactly what it was protesting against, namely the systematic prohibition of demonstrations, criminalization, attacks on and arrests of anarchists and antifascists. Meanwhile, all those arrested have been released. Nobody who was arrested received a fine, sentence, or summons.

Media as tool of the police
The police made a press release during the mass arrests in order to criminalize the demonstration. The press of course published this without question, as we are used to from them. The media reports are just copied and pasted from the police press release. By doing this, the press shows that they are just the polices’ tool to criminalize protests.

The fact that the repression from the mayor’s office continued during this demonstration will not stop our struggle for freedom. This struggle is luckily not only limited to demonstrations which the authorities can ‘prohibit’. We will continue with our social struggle unabated, and no officer or mayor will hold us back.

We would like to thank everyone and especially our comrades from outside of the Netherlands who came to The Hague this weekend to fight with us against repression. We feel supported in our struggle and are even more determined to work on building and defending our structures and ideas.

No justice, No peace!