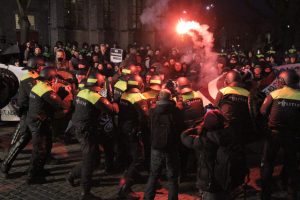 The court case
During the court case that lasted two days, a few things became clear. The police ended the demonstration at the Kerkplein, because some people were wearing face covering. In court it became clear, as our lawyers had already put forward, that there was no restriction on face coverings imposed by the mayor.

The police claimed in their file, that they assumed there was a restriction imposed on face coverings. The police also claimed that the mayor had given the order to end the demonstration. However, it did not become clear from the files who exactly gave that order. What it basically comes down to, is that the police decided on their own with using violence, to arrest, repress and deny demonstration rights because the demonstration simply did not please them.

Repression
This occurrence fits the image of repression that the demonstration was aimed at. The police in The Hague has been targeting anarchists and antifascists in a sickening way. Demonstrations have been ended with violence, without orders from the mayor. Anarchists are being intimidated in their homes, with police raids, breaking of doors to collect for small fines and taking pictures of personal items. The list continues with area-bans, sky-high fines, attempts to recruit informants and the building of CTER* files.

This case shows clearly what has been happening so often in The Hague. The police decides on their own, people get arrested and acquitted later on or not prosecuted at all. Of course it is nice not to have to pay a fine, but in reality, on the streets nothing is changing. The police can do whatever they want to. They don’t care about us getting a fine or not. And if an arrest turns out to be unjustly, there are no consequences for the police. This is how they can effectively keep us off the street. And this is why we are not surprised that this spectacle of the police, judges and the police cell has repeated itself.

However, if they think that our fight for solidarity and a radically different world will stop, they are wrong. Let it be clear that no baton, officer or prison will stop us to fight for true freedom. Let us reflect on these events and create uncontrollable methods to continue to fight.